Twelve of Lucie's quilts are in the International Quilt Museum Collection

I often think of my quilting friend Lucie. I like to think of her in her studio making something fantastic from fine fabric.

Lucie graciously shared more about her life and gave me permission to share it here.

Lucie lives in an amazing row house in Amsterdam - built in the 17th Century. 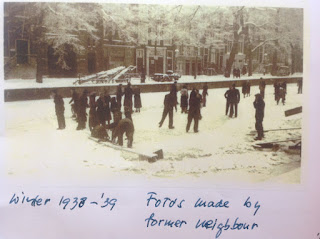 This is a photo of the canal in front of Lucie's historic canal home, about 1938.  Of course, this is prior to WWII.

There are planks off the edge of the canal onto the ice.  On the far side (close to the homes) are two wheeled carts.

I think this is also prior to Lucie's family owning the home.  The photo was shared with her by a neighbor. 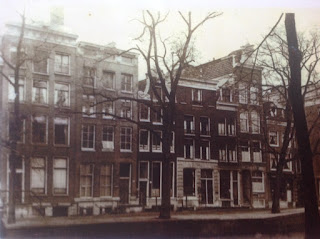 This is another view of Lucie's home.

The photo is from 1938/1939, again before Lucie owned the home.
Her home is five levels.
It has survived in the center of a growing vibrant city, multiple wars - including WWII and finally came into the loving ownership of Lucie's family.
(In late 1939, with war already declared between the British, France and Nazi Germany, the German government issued a guarantee of neutrality to the Netherlands. Nevertheless, the Dutch military was gradually mobilized from August 1939, reaching its full strength by April 1940) 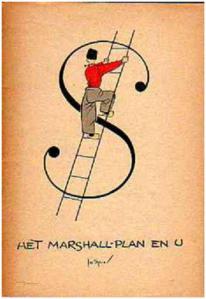 After WWII there was a housing shortage.  The war had destroyed or damaged at least 695,000 homes in the Netherlands.  It took years to rebuild.

There were many regulations about who could get existing housing, even homes that were partially destroyed.  The rebuilding took many years.

Lucie's father was an architect and had the skills to repair the home for a new family.  She recalls the windows were so dirty they could not see inside and did not know what it would be like.  They were happy for a home.
She used to walk by the house, and one Sunday she saw a 'For Sale' sign. 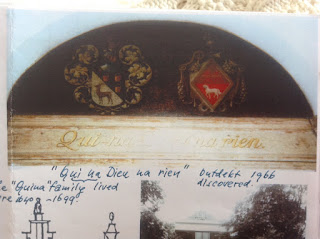 During one of the renovation projects in 1966, this painted frieze was carefully exposed.

How fortunate an architect was managing the restoration and preserved this painting. 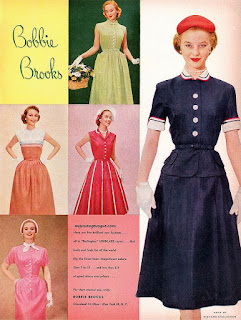 She worked in the fashion industry (rag trade), the last years with Bobby Brooks.

Later, after specialized training, she worked in a hospital doing microscopy.

Her art, textile knowledge and attention to detail all contributed to her success future as a quilter.

In 1972, she attended the successful exhibition, "Holstein-van der Hoof Collection of American Quilts was at the Stedelijk Museum, Amsterdam.  There was a contest organized by Ladies Weekly. In the 'Useful' category, Lucie won 1st prize with her baby quilt entry.

It was 19 years later that Lucie made her second quilt.  It was a special quilt for her son. It is made from 15 colors of vegetable dyed fabric from Greece.  She exhibited this quilt in Breda, Netherlands in 1991.

In 1994 she entered a Silk Museum contest. She found this very inspiring and the silk theme was butterflies.  With her extensive knowledge of haute couture in Paris, her butterfly quilt was made on organza.

It has 154 hooks and eyes so all of the silk features "flutter" and can be moved.  It is finely hand quilted in celtic motifs.  Lucie used wool batting.

The exhibition hung for four months.

This quilt is genius in the design and execution. The next photos show how it can be moved. 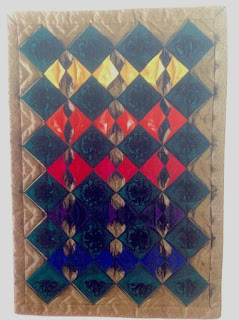 Next we transform the quilt.

The leaves, flowers and butterflies all alive! 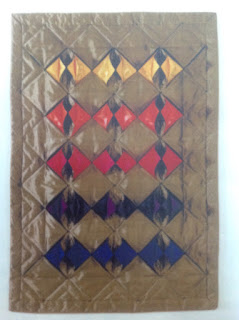 The butterflies in the museum.

It was a concept viewers had to imagine and take time to read the signs and diagrams. 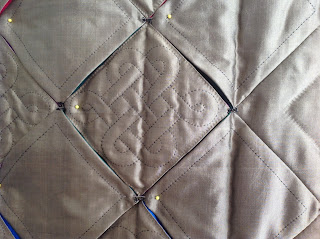 The pins are holding the flaps in space in storage.
The hooks are barely visible.

She has taught in France, Switzerland, Hungary and Germany.  Her exhibitions in the Open European Championships opened many doors for her. 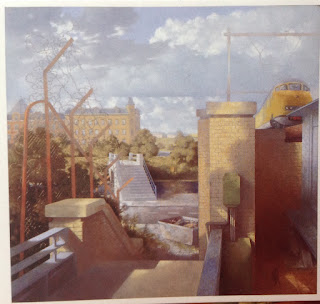 Lucie's husband, Henk Huig is a painter and I was able to see some of his work hanging in their home. It was wonderful. The faces with their eyes...the special painting he did for Lucie that hangs in the entry is a favorite.