I just love simple blocks, done in scrappy fabrics.  The composition of the whole is more important than any one block alone.


The simple block is "6 finished.  This particular quilt was the result of a block swap.  Swaps are a nice way to get a variety of prints and see prints put together you may not have thought of.  I added several of my own blocks to get a bed sized quilt.


I chose a medium colored border - stripe, but I think I could have left the border off for a more antique look.

There are some duplicate prints in the quilt, but never combined with the same secondary fabric.


Some of the blocks are threes prints, others two.


Some of the values are medium and can be used as light or dark alternating colors. 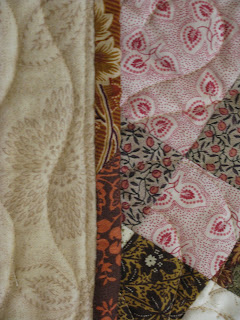 
The backing is a Documentaries print in flannel.  It is all machine pieced and quilted.


I used to live in the 'North Country' and flannel backs are so warm - they keep the quilt on the bed too!


Ivory, white, cream and beige all work together. 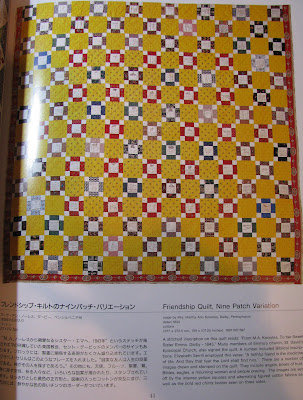 Same block - not as scrappy!


This block is also a nice option for a friendship quilt. where each light was signed.


Using only light corners, the secondary design is a diagonal line.  The blocks with red prints are all contained within the center of the quilt. 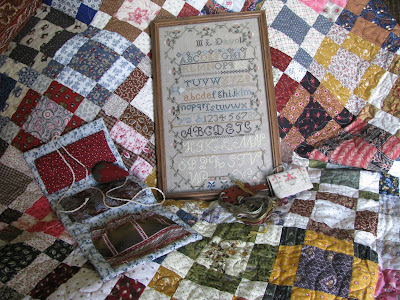 This is a reproduction sampler from The Examplarery (unable to find a link).  It is worked over two threads on natural linen.


I made the huswif with reproduction fabrics, and have made several as gifts.  Very fun project!


The thread paddle and needle safe are nice tools to keep threads in order.


All nice little compliments for quilts!

Here's a closeup of the walnut thread paddle and the inside of the needle keep.


I chose a walnut tone reproduction fabric for the lining and a scrap of fluffy wool.


I have other pieces to this series I am still stitching; a pin box and a covered tape measure.

Thanks for stopping in - I'm off to the sewing room to play with nine patch variations!


Resources:
Book:  Masterpiece Quilts from the James Collection, International Quilt Study Center
Chrome Quilt Example, no patterns
Huswif Patterns:
Free Huswif Pattern I used
Pockets and Rollups for My Red Cape Edyth C. O'Neil  (Must have book!!)
I have a roll up from this book that was a special gift
Thread Paddle Kit
Museum Samplers Reproduction Resources:
The Scarlett Letter
The Essamplaire
Traditional Stitches 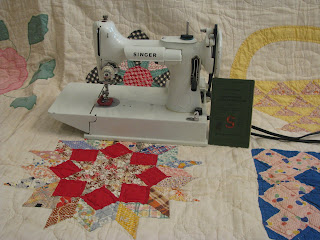 Medallion design, scrappy fabrics, reproduced from a museum original - hard to pass up!!

I rarely buy kits, but this one really 'spoke' to me.  It was also one of those projects I started, and couldn't put down - including the hand quilting.

Isn't this corner interesting?  Scrappy fabrics, many reproduced from the original quilt, some added from my stash just to make it a bit more scrappy and unique for me.

I think the pinwheels make it look a little contemporary.

Can you find this corner in the whole quilt photo?


Mariann Simmons, in cooperation with the Virginia Quilt Museum, created a free online pattern for Quilting Treasures fabric company from the original quilt.  How lucky are we?!?!

The original is at the Virginia Quilt Museum, and is thought to be c. 1840.

Note the scrappy backgrounds in the flying geese round.  One side uses the gray/blue as the light while the other sides have the background varied with light prints.

I would like to do this one again in some brights, or maybe indigo blues?  So many possibilities - makes this a timeless design.

I like how the outer round just cuts off at each corner.


So many opportunities to play with bits of fabrics.

The little star corners are so dainty.

The stripes are fun to mix and change the directions.

I could never pass up a great paisley so used a couple colorways of this one - including the beautiful red for the backing and binding.

The pattern states it is for Expert Level - but I think the instructions are so well written it would not be a problem for anyone, I did - give it a go!


I did get a tag made for this one, which I vow to get better at labeling my projects!  At least I have it pinned on.  Will have to stitch it down before this one goes back in storage.  I think I'll get to it, or remember the details...and my best intentions go out the window with the start of a new project.

Speaking of a new project, I've been trying to hold off, but I have a few in mind...sighhh...never enough hours in the day.

What's your favorite museum quilt?
Has a pattern been reproduced?

Last but not least - these are my favorite thimbles.  They are goat leather and handmade.  I've worn one out (through three tops).

These are my two new ones - one for DD.

I need to 'feel' and these are thick but still allow me to feel more than a metal thimble does.  I know... all personal preference.   I've been working more lately on my hand quilting and these are really working well for me.

The first I bought at a quilt show, but these I ordered directly from Elaine.  Wonderful service.


Thanks for stopping by!
I hope you decide to make this quilt.

Crazy - My Heart is Glad Because of Thee 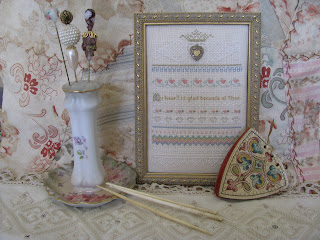 Happy Mother's Day whenever and wherever you celebrate.

This crazy quilt piece and sampler sum it up for me, "My Heart Is Glad Because of Thee"
Even when we get a little crazy my DH and children fill my heart.  Maybe even more when we are crazy!


Sampler detail
Linen over 2 - silk & metallic thread
Brass heart charm
Would love to give the designer credit - can't find the chart!
I've made several - all different designs.
I simply must get better at LABELS! 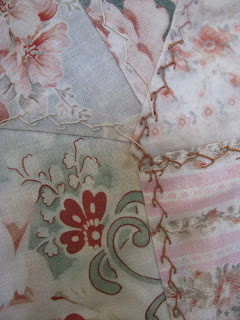 Detail of the hand stitching intersection, multiple florals and stripes.  This is the only pastel Crazy I've seen, but it much later than the 1890's heavily embellished style of a 'true' crazy.
It is very basic, no figural embroidery or motifs.


The back is labeled #6 so it probably came out of a larger project.  I think it had been finished at some point because the seam allowances have threads and signs of being turned under.

Some of the hand stitching runs along seams, others are stitched over the top. 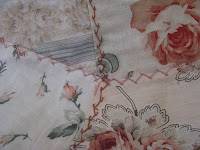 
I bought this piece in the 1980's in the Chicago suburbs.   My DD used it for a doll quilt for years, so it has a few special memories.

I think it makes a pretty dresser scarf as well. 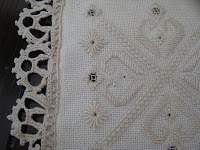 Hardanger detail of the small runner under the pin holder.
Hand crochet trim in matching pearl cotton #8.
A little course for crochet thread, but it is a unique piece I made. 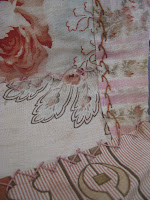 Love the stripes with the large flowers.

I think the pink graphic in the bottom stripe has a deco look.

Have a soft and gentle week and weekend however you decide to spend it.